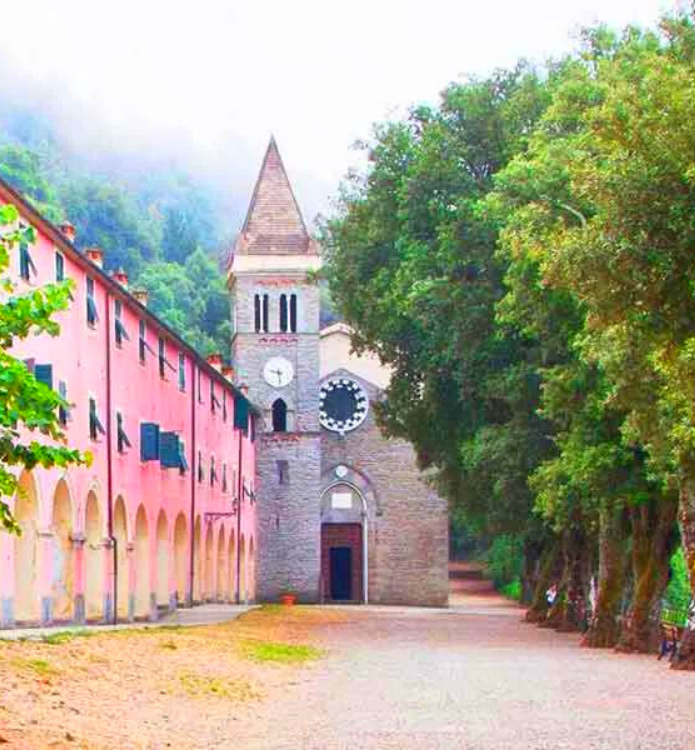 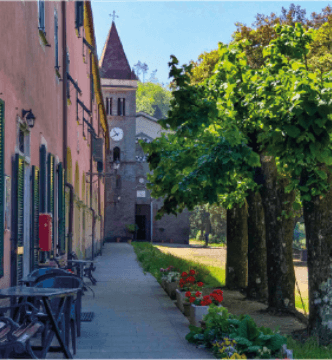 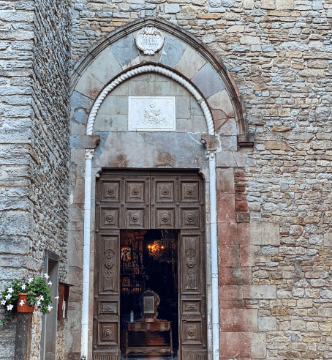 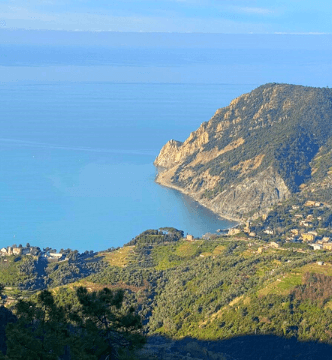 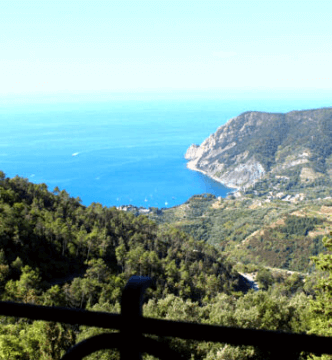 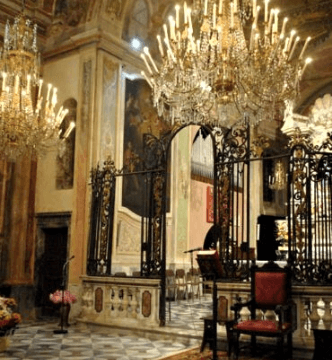 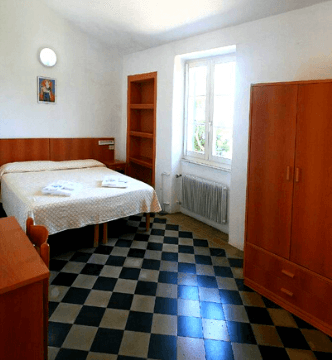 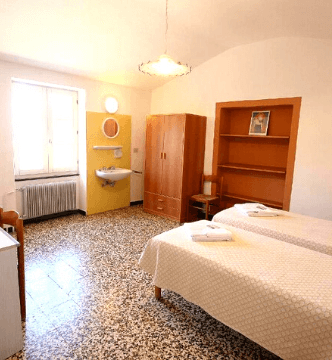 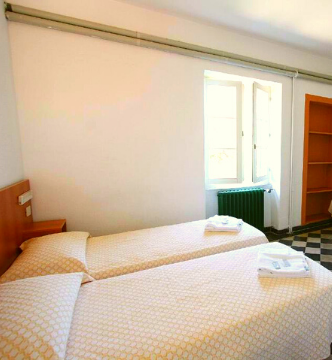 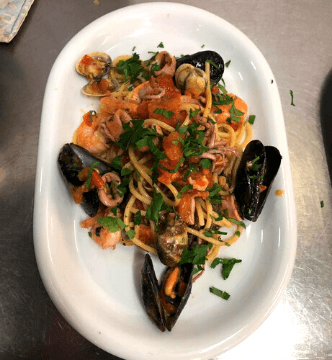 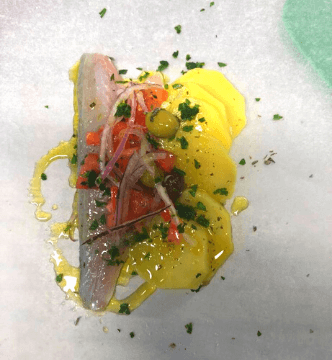 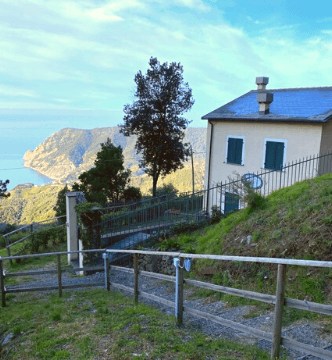 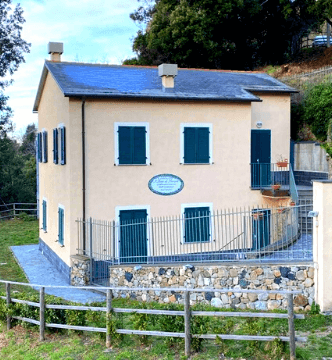 “Soviore” is an ancient toponym that appeared in maps to indicate a place located “sub viarium”, meaning below the ancient roads used by farmers, pilgrims and wayfarers, such as the coast road and the footpaths of the Alta Via dei Monti Liguri (“High Route of the Ligurian Mountains”), the salt road, the Francigena and others. The main celebration is that of the Assumption, on the 15th of August, with a fair that attracts tourists and believers from all the neighbouring towns. As it is a true crossroads of high and lower trails, throughout the year many activities are organised to promote this corner of peace and spirituality.

An oasis of peace above the sea of the Cinque terre.

On the hill above the village of Monterosso stands the Santurario N.S. di Soviore (Sanctuary of Soviore), a church  which is 9 metres wide and at least 24 metres long, with three naves and the most ancient and most venerated Marian icon in Liguria, patron saint of the Diocese of La Spezia, Sarzana, Luni and Brugnato.

Standing at the end of the square with its splendid bell tower, the church welcomes people into its massive yet simple environment and invites them to meditate in front of the altar that houses a wooden statue of the piety – the Virgin Mary is holding the body of her crucified son in her lap. The most ancient Marian icon has always been venerated by the inhabitants of the nearby villages, believers who obtained grace and salvation in tragic circumstances, storms, illnesses. If you look at the floor of the church, you can see the remains of an ancient temple – the pre-existing church – dating back to the first millennium AD.

Those who visit this splendid structure realise that it is only the starting point from where you can start exploring nearby places, which, although not very popular, are unique in their peculiarities. It is a sought-after location for hikers, scout camps and people looking for an experience of prayer and meditation. It is the crossroads of some of the most evocative paths in the Cinque Terre National Park. Soviore offers its visitors an oasis of silence and spirituality with unequalled views: from Monterosso to the valley of Levanto and, on clear days, from Corsica to Monviso and the Maritime Alps.

How to reach us?

The place is easily accessible by car, bus, motorbike from the nearby villages of Monterosso, Pignone and Levanto.  Before trekking on the trails, you can take advantage of the free parking space. The inland valleys such as val di Vara are perfect for walks and tours. Here you can also taste the local  products, made with love and produced with organic farming methods, and discover their intense and unique flavours.

The services of the Santuario N.S. di Soviore

The Sanctuary of Soviore offers various accommodation options for families and nature lovers: there is a guest house and an additional structure which can host  organised groups and school groups.

The guest house has numerous rooms of different types – double, triple, extra large or communicating – with bathroom facilities and furnished with a sober style – for a total of 100 beds. The lodgings, located on the first and second floors, overlook the panoramic square and are served by a lift. Internet access with Wi-Fi is guaranteed in the common areas.

Soviore’s pride and joy is the typical Restaurant that offers simple and tasty specialities to be enjoyed either in the indoor dining room or in the arched portico overlooking the large panoramic square. The square, above the Monterosso bay, is surrounded by centennial holm oaks and cypress trees.

The dining room, with more than 100 seats, overlooks the large square, surrounded by centennial holm oaks, and the magnificent arcade; a convivial place where you can have your breakfast, lunch or dinner served at the table or under the portico. The bar is open all day long and it offers delicious homemade cakes and coffee service.

You can choose between full board or half board service.

In accordance with the WHO guidelines for health protection after COVID-19, we decided to prepare only take-away menus to be delivered to each guest in special thermal boxes.
Meals can be freely consumed in our dining room or outdoor, under the portico, on tables that have been sanitised in compliance with the regulations.

The Sanctuary of Soviore is an enchanting and beautiful place that you will never forget. The location offers different and evocative spaces that can provide a setting to the different moments of the ceremony, depending on the season.
It is the perfect place to pronounce everlasting wedding vows, baptise babies or renew wedding vows, always under the loving gaze of our Mother in Heaven.

The Sanctuary gladly welcomes pilgrims who are seeking moments of prayer and meditation.
The church is open every day and here the priest who accompanies the pilgrim can celebrate the mass. The guest house can also offer accommodation packages to self-managed groups.

The Sanctuary gladly welcomes pilgrims who are seeking moments of prayer and meditation.
The church is open every day and here the priest who accompanies the pilgrim can celebrate the mass. The guest house can also offer accommodation packages to self-managed groups.

The Sanctuary, with its peaceful atmosphere and its wonderful natural landscapes is the perfect place for yoga & meditation seminars and workshops, to embark on a journey of discovery and rebirth, to learn how to deal with daily life in the best possible way. Learning how to take care of ourselves is essential for a successful fresh start. It also enables us to find motivation and new ideas.
In case of bad weather, there is an indoor hall suitable for yoga, meditation and meetings.

In its church, the Sanctuary of Soviore preserves a precious Agati organ that every year, during the Cinque Terre International Music Festival, is played by world renowned artists, who have therefore the opportunity to perform in the gorgeous setting provided by this unique place.
Every year, the concert program brings the attention of the public and the media to the invaluable artistic and cultural heritage represented by the ancient and precious musical instruments that are kept in sacred places of great beauty and charm. Cultural seminars can be arranged with specific offers.

The hotel I Lecci di Soviore has five rooms, furnished with a simple, sober and joyful style, and a larger family room with an independent entrance and a terrace where you can enjoy the warmth of the sun or the coolness of the evening, after a day on the beach or a hike on the trails.

From this small plateau where Soviore is located, the sanctuary with the oldest Marian icon, situated 465 metres above sea level, you can enjoy one of the greatest views of the whole area, with the valley of Levanto to the right and the territory of Monterosso and Vernazza to the left. In the square where you arrive with your car there is the guest house and, at the end of it, the simple church, a place full of history which for many centuries has been the chosen destination by pilgrims of all origins, in a long tradition of unparalleled veneration. Beyond the gate that leads to the ecclesiastical buildings, an embankment hides the initial part of the path that leads to the historic centre of Monterosso al mare; within an hour you can reach on foot the first of the many pearls of this magical territory, which was snatched from the sea thanks to the arduous work of man – the Cinque Terre.